Rachel Rosenthal, through a performance art workshop, challenges a group of young Los Angelinos to a journey of self-discovery. What is real in our lives? How do we proceed with courage? Where does the source of our strength lie? Rachel asks us to look inward for truth without fear, as she believes that the “inner” shapes the “outer”.

“The clear standout of the evening is Pawel Kuczynski’s “Rachel’s Quest”, a deeply touching examination of the work – both on and off stage – of performance-art priestess Rachel Rosenthal. Between snippets of her performances, we travel with Rosenthal and her workshop students on a quest to discover, embrace and illustrate their sense of self. The underlying notion that within us lies a singular statement, something no one else can share with the world is both daunting and exhilarating.”

2004 “New New Yorkers and their friends”, a cultural festival organized in Warsaw by the US Embassy.

A fascinating portrait
of an intense and creative process. 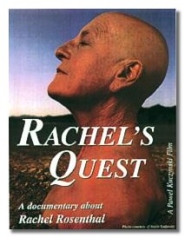 Rachel in the eyes of others:

Rosenthal bills herself simply as a performance artist. That’s about as accurate as calling the Taj Majal a house. The woman is a monument and a marvel. She is a force of nature… She is timeless, ageless, gutsy, quirky, exotic, poignant.

Intellectual integrity, her laser clear artistic vision, her passion and candor, the genuine concern she manifests toward younger artists in her field, her compassion, grace and her love for all living beings have made her peerless among contemporary American artists.

As a survivor of Nazi persecution Rachel Rosenthal understands the meaning of time and timing. If today, yesterday and tomorrow are different points in space, Rosenthal finds terrifying truths to make time stop in the eternal present.